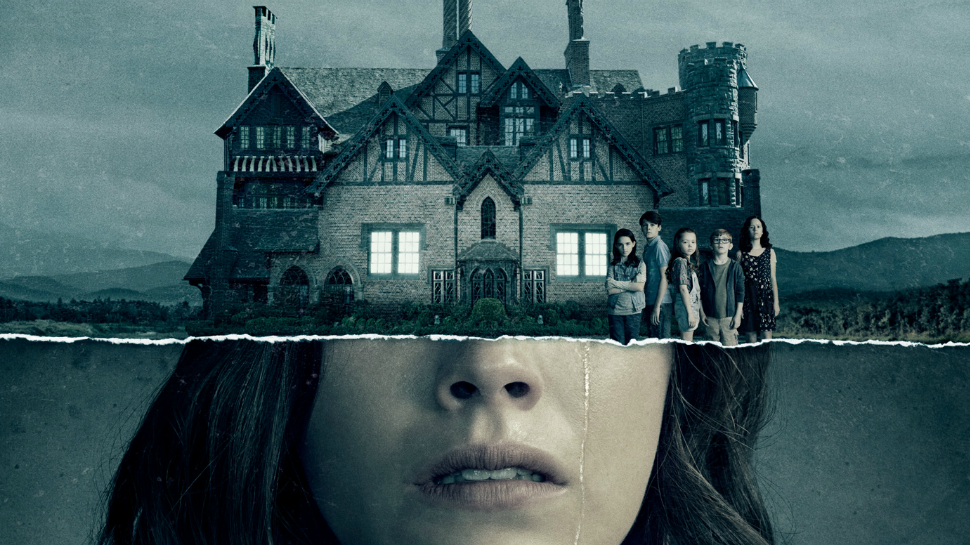 It is the Holidays.  What does that mean exactly?  Who does that involve, and what does that entail?  For me, the “holiday” season starts in October and ends sometime in January. From when Halloween is nigh to when New Years fades away.  It is a joyous time, but it is also a stressful time.  Holiday’s mean family, and family means drama.

The trailer for The Haunting of Hill House instantly grabbed me, but it still would have sat in my list unwatched until Halloween 2019 had I not received the most stellar recommendation.  But lo!  I prioritized the show thanks to that, and I can now say with confidence that it is the best show Netflix has produced and one of the best shows ever, period.

Unfortunately for me, I started it too close to nightfall. Or else I would’ve binged the entire thing right then and there.

BEWARE!  SPOOKY SPOILERS BEYOND THIS POINT!

The Haunting of Hill House tells the story of the Crain family.  Parents Hugh and Olivia are house renovators and flippers and have five children: Steven, Shirley, Theodora (Theo), Luke, and Eleanor (Nell).  Hill House is their latest project, and it will be their last.

It is quickly revealed that Olivia dies under mysterious circumstances and that Hugh is the only one privy to specific details.  As he corrals his frightened and confused children into the family hatchback, little to no information is revealed to either them or the audience.  This sets up one of the major conflicts within the show: suppressing and withholding negative emotion.  As the patriarch, Hugh feels that it is his burden and his burden alone to carry the information of Olivia’s death, even if it means alienating his children.

Part of the HoHH’s brilliance is that it tells its story through two alternating timelines.  The use of flashbacks and lengthy scenes depicting events leading up to the night of Olivia’s death give the night extra context, while the present day timeline shows the Crain’s as adults.  The result is exquisite character development, and both the child actors and adult counterparts do a phenomenal job in portraying their roles and their relationships.

After all the years, however, Hugh still has not told his children anything about their mother’s death, other than that it was ruled a suicide.  Hugh’s belief that he is sheltering his children becomes toxic and rotten, which combined with the Crain’s traumatic past creates an incredibly tense, dynamic.

Bottling up feelings, experiences, and avoiding problems has been human behavior since our evolution, and the Crain’s would likely have gone on to their graves forever haunted.  Unfortunately, Hill House claims another one of their lives, and the family is forced to come together for the funeral and finally confront their demons.

Again, I would encourage you to watch this show because it is amazing and the rest of this blog post involves spoiling its best episode.

One of the Crain siblings cannot handle their haunting trauma, returns to Hill House, and dies.  Coincidentally, their death is also ruled a suicide, and the rest of the family gathers in a funeral home to mourn.  This is the first time that we see all living family members in the same space as adults, and the result is monumental.

What truly makes this episode so mind bogglingly breathtaking is that it is 53 minutes long, but over 51 of those minutes are comprised of only 5 shots.  Some of you will read that and say, “so what?” and that is because I cannot effectively convey in writing the impressiveness and hard work that goes into filming such lengthy scenes in one single take.  Writer Mike Flanagan comes as close as one can in explaining the painstakingly arduous process in a series of tweets that can be found here, but I cannot stress enough how much you should just watch the show and witness the mastery for yourself.

The cast and crew were given two full weeks to rehearse the shots.  The production team spent months working on the hundreds of lighting and blocking cues, the cameramen practicing down to the minuscule and exact moment that they had to come in and out of their hiding spots on set.  The sets for both Hill House and the funeral home were built with this episode in mind, and were thus connected.  The third shot is an unbelievable 17 minutes and 19 seconds and described by Flanagan as “a BEAST.”  Shot on a dolly and unable to get a take by lunch time, Flanagan was told by the crew that the dolly was on the verge of malfunction.  With no replacement dolly and the budget and timeline exhausted, Flanagan did not tell the actors upon their return from lunch.  He told them “I have a good feeling about this one,” and they proceeded to successfully get the shot on the next take.  The dolly broke immediately after.

The Haunting of Hill House works on a lot of levels.  As a family drama, the Crain’s reach a semblance of catharsis by the end.  As a mystery, the audience and the Crain children solve the enigma of Olivia’s death and find out the deep and dark secrets of Hill House.  Ultimately, it is an ideal horror story, and I spent a large portion of the show huddled under the covers with my eyes just over so I could watch.  And there were plenty of times that I jumped out of my skin.  Where the genius truly lies, however, is that psychologically and mentally, I have spent part of every day since watching it thinking about it, haunted by it, and pondering its message.

The Haunting of Hill House is not just a ghost story, and the best horror never is.  Films like Eyes Without a Face, Get Out, It Follows, and The Babadook are all masterpieces in terror because they explore complex themes like female bodies and identities under the patriarchy, racism, the inevitability of death, and the traumas of being a single mother, respectively.  Haunting of Hill House is horrifying because it explores the complexities of our past and their lingering ramifications.  It also shows the disastrous potential of not being open, of not challenging those to be honest, even though honesty can be extremely painful.