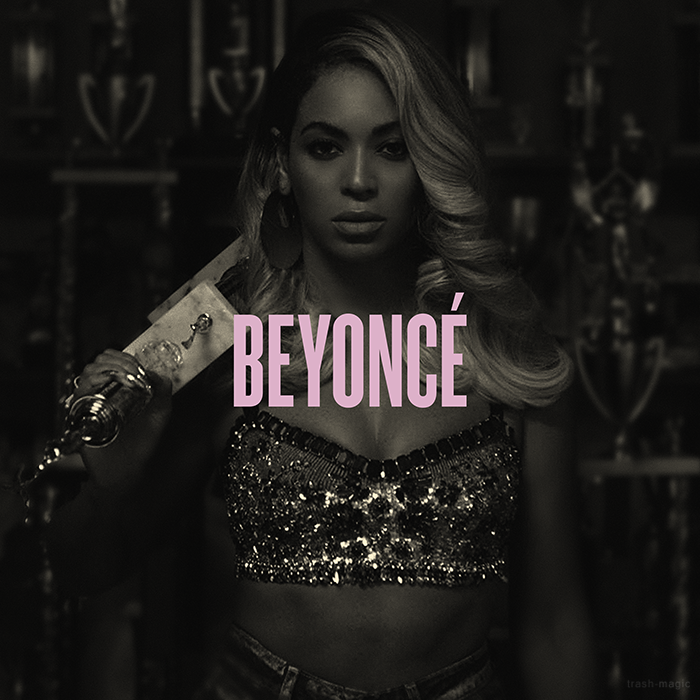 I did not have the pleasure of waking up on the 13th of December 2013 looking as fabulous as Beyoncé always does.  I was awake, numbly watching the internet react to the surprise release of her eponymous fifth solo studio album.  I use the word “numb,” because I just could not believe that Beyoncé succeeded in keeping the album a secret.  How the hell did the album not leak?  This cannot be emphasized enough.  It is impossible to talk about the album and not mention the fact that there was ABSOLUTELY NO PROMOTION. NONE.

If it had been anyone else, (i.e. U2) I would have been concerned that the release strategy was the desperate attempt of a dying musician to stay relevant.  Since it was Queen B, however, the thought did not even cross my mind.  But something definitely bothered me about the release, because 3am rolled by and I still hadn’t bothered with one song.  It was in part because I was frustrated with the pretentious audacity of a mega-rich superstar blind-siding me with a video album, but that was too stubbornly simple a reason not to listen to something.  Deep down, I was scared.  I was scared that this would not even come close to her previous album, 4.

The nostalgic impact of “End of Time,” “Countdown,” “1+1,” “Love on Top,” “Party,” and “Run the World (Girls),” (hell, the whole album!!!!!!!!) was and still is deeply cemented into my musical identity.  Here was a powerful new Beyoncé record, but I was without those I wanted to experience it with.  What if this new upstart album laughing in the face of marketing departments everywhere destroyed those feelings? Again, I was numb with shock and did not really know what to do.  So I slept on it.

The relationships that I have with songs, albums, and artists do not ruin my musical experiences down the road.  Above all, if the music is really good, it will absolutely not matter what prior baggage I bring to an artists new work. That is precisely what happened.  I sat down the next morning, hooked up my laptop to the TV, and proceeded to be proven a silly-goose-egg of a needless worrier.  How could I ever doubted her?

What stood out to me that time and every listen/viewing since was the extravagant confidence.  This might sound silly, (Since when has she NOT been confident?!?!?!?!) but hear me out.  Beyoncé is an incredibly ambitious record, what with all the videos and production and secrecy, but most importantly, its storytelling.  She sings about bulimia, self-esteem, the patriarchy, her dead friend, and her daughter, Blue Ivy.  Since when was a Queen B record this personal?  Beyoncé evolved from childhood star to girl band aficionado to Pop Diva into full-fledged Pop Goddess Mother of Feminist Awesomeness.  This is what makes the record a masterpiece.  All of her work, from age nine when she began her career, has led her to this point.

On “Grown Woman,” the final video on the album, she flaunts her sexual agency and feminism. This is her fully evolved form, and we are blessed to be shown glimpses of how she has grown.  I believe that this is why you cannot listen to the song individually, but are forced to watch the video.  No way is that an accident.  We see a blissfully happy Beyoncé growing up into a powerful woman who gets to “do whatever she wants.”  How awesome is that? Flawlessly awesome.